A rant about train fares

Between the ages of 16-18, the majority of young people are still in education and do not have a disposable income, or in fact an income of any sort for most of us. Instead, we are encouraged to continue our education, rather than get jobs and head straight into employment.  So why are we being charged such extortionate prices for rail tickets? 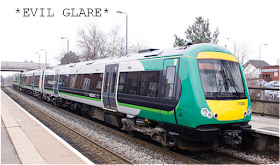 What's all the fuss about?
Most people my age are completely put off travelling via the train, as it is quite extortionate. Fundamentally, train fares are ridiculous in this country anyway as on average, fares are 50% higher in Britain than on the continent, and especially living in the South East of England, rail fares are sky-high. I understand that the cost of crude oil is exponentially rising, thus it is fairly being reflected in the cost of rail tickets, but I think that it is ridiculous that it is expected that we have to fork out the same amount as adults with jobs and a disposable income. I do realise that there is a 16-25 railcard, and I think that this is a good option for university students aged 19-25, but between the ages of 16-18, I believe that having an extra 1/6 of a rail ticket off,would make a tremendous difference for us who only has pocket money of a few squid a week.

You think I'm how old?!
To make things worse, I have had various pompous experiences where I have been wrongly forced to buy an adult ticket rather than a child's ticket such as at Euston station earlier this year (at the age of 15), Being only 5ft, this was a strange experience for me as I always get mistaken for being far younger than I am, rather than older.  I was charged an adult single instead of a child's single, simply because I did not have any form of identification with me. This is ridiculous, as at this age, the only piece of identification I own is my passport, and that is something that I do NOT carry around with me willy-nilly. Lost, scared, afraid and without my parents, I just forked out the cash, but I was extremely annoyed by the terrible costumer service who were not supportive of this lost child at all. Shame on you London Midlands.

I love London, but I refrain from going there as much as I would like and spending my money there (thus helping the economy (tenuous link there, but a point!)), simply because I cannot afford the train ticket there. It costs me £8.50 for a railcard, which is ridiculous considering my friends who live in Chesham/Amersham can simply ride the Metropolitain line into the city centre for a measly £2! Damnation to the fact that I just live outside the underground tube system. I would like to participate in various free events, courses, visit more museums in London, but I do not have the cash for going regularly to London.

SOMETHING HAS TO CHANGE.

From the annoyed one,

P.S. I know this is random and badly written, but this has been something that I have wanted to post in a long time. I've written this super quickly so there may be some mistakes!
P.P.S. Don't take some parts of this too literally, but my underlying message is true.
P.P.P.S Hello to all my new readers, you guys are awesome.
P.P.P.P.S More outfit posts like yesterdays? I really want to do more, but this may be hindered by the fact that I wear school uniform 5 times a week. I will try and put some more out though!
P.P.P.P.S. Some kind of related music to leave you guys with - there are probably some more closely related songs out there but my musical brain is dead today. :)